Killing processes in a Unix-like system can be trickier than expected. Last week I was debugging an odd issue related to job stopping on Semaphore. More specifically, an issue related to the killing of a running process in a job.

Here are the highlights of what I learned:

Every process has a parent. We can observe this with pstree or the ps utility.

I held a very incorrect assumption about this relationship. I thought that if I kill the parent of a process, it kills the children of that process too. However, this is incorrect. Instead, child processes become orphaned, and the init process re-parents them.

Let’s see the re-parenting in action by killing the bash process — the current parent of the sleep commands — and observe the changes.

The re-parenting behavior was odd to me. For example, when I SSH into a server, start a process, and exit, the started process is killed. I wrongly assumed this is the default behavior on Linux. It turns that killing of processes when I leave an SSH session is related to process groups, session leaders, and controlling terminals.

What are process groups and session leaders?

Let’s observe the output of ps j from the previous example again.

Apart from the parent-child relationship expressed by PPID and PID, we have two other relationships:

Process groups are observable in shells that support job control, like bash and zsh, that are creating a process group for every pipeline of commands. A process group is a collection of one or more processes (usually associated with the same job) that can receive signals from the same terminal. Each process group has a unique process group ID.

Notice that the PGID of tail and grep is the same in the previous snippet. 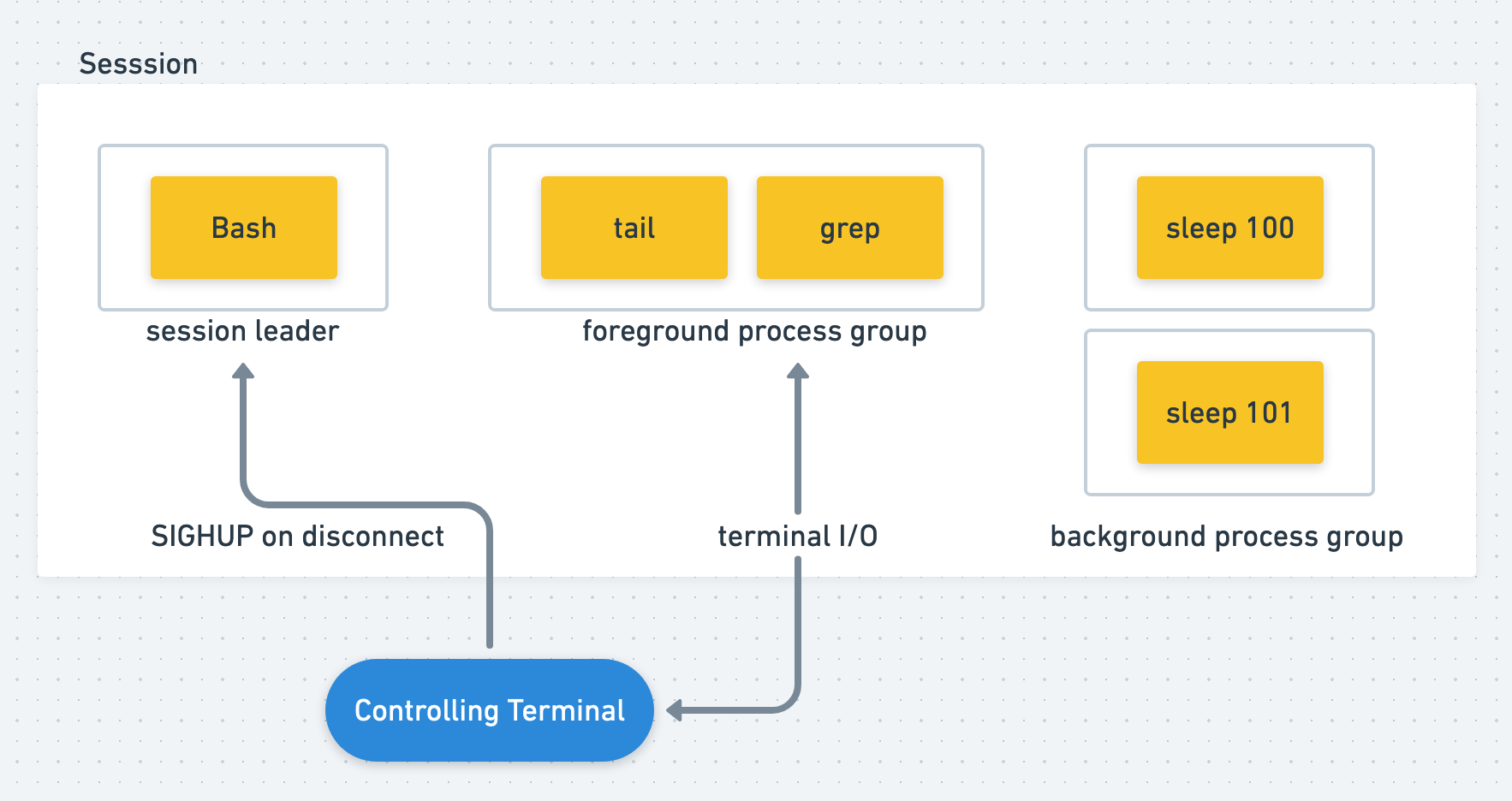 Not all bash processes are sessions, but when you SSH into a remote server, you usually get a session. When bash runs as a session leader, it propagates the SIGHUP signal to its children. SIGHUP propagation to children was the core reason for my long-held belief that children are dying along with the parents.

Sessions are not consistent across Unix implementations

In the previous examples, you can notice the occurrence of SID, the session ID of the process. It is the ID shared by all processes in a session.

In practice, this means that you get session ID in the ps output on Linux, but on BSD and its variants like MacOS, the session ID isn’t present or always zero.

Killing all processes in a process group or session

We can use that PGID to send a signal to the whole group with the kill utility:

The negative number comes from the system call definition directly.

Pgrep implements the algorithm for walking, collecting, and process killing by session ID. Use the following snipped:

Ignored signals, like the ones ignored with nohup, are propagated to all descendants of a process. This propagation was the final bottleneck in my bug hunting exercise last week.

In my program — an agent for running bash commands — I verified that I have an established a bash session that has a controlling terminal. It is the session leader of the processes started in that bash session. My process tree looks like this:

I assumed that when I kill the bash session with SIGHUP, it kills the children as well. Integration tests on the agent also verified this.

However, what I missed was that the agent is started with nohup. When you start a subprocess with exec, like we start the bash process in the agent, it inherits the signals states from its parents.

This last one took me by surprise.